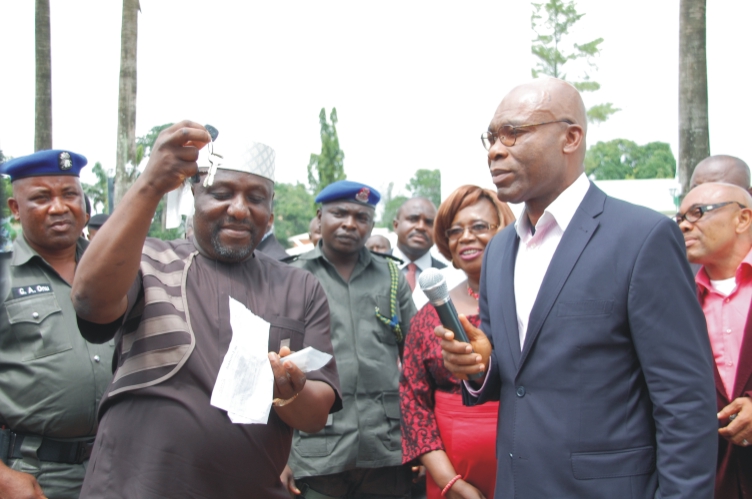 The Imo State Government has named its IT Centre,ImoCenterfor Advanced Professional (ICAP) after Zinox Computers in recognition of the company’s contribution to the development of information technology inNigeria. The announcement was made by Owelle Rochas Okorocha, Executive Governor ofImoStatewhile receiving the donation of four fully fitted security vans and equipment valued at over N50 million donated to the state government by the Zinox Group.

Okorocha said the donation is further proof of Leo Stan Ekeh’s commitment to the development of knowledge inNigeria. He called on well meaning citizens ofImoStateto follow the exemplary conduct of Leo Stan Ekeh, saying the situation in the State today calls for all hands to be on deck irrespective of political affiliation.

He said the Zinox Group will also donate digital knowledge content encapsulated in Zinox WHIZKID version 2 to four schools in the State. This content will make kids from privileged and exposed public schools better while enhancing the overall academic performance of the underserved. “We would also provide digital training sessions for teachers to improve the overall teaching and learning environment. Our expectation is that the total cost of this intervention would be N50 million.”

The Zinox Group is a responsible corporate citizen whose contributions to society form an integral part of the vision of its founding fathers. “Zinox has a tradition of executing major CSR every five years outside our annual commitments in the spirit of Zinox.” He traced the history of Zinox CSR inImoStateto such interventions such as building and equipping of digital laboratories at the Federal Poytechnic, Nekede,ImoStateUniversityand Federal University of Technology, Owerri and some secondary schools in Imo state.

“There is no geo-political zone in the country that has not been touched by our interventions in tertiary, secondary and primary education. Our interest in capacity building has benefitted scores of Imo indigenes in the form of scholarships at all levels of education including post-graduate education in world-class European andAmericanUniversities.”

The Zinox Group, though a small sized Group is the most integrated ICT company in sub – Saharan Africa made up of Task Systems Limited, ICT solutions providers to the leading multinational Companies in Nigeria; Technology Distributions, the Number 1 bulk mover of ICT products in West Africa, and Zinox Computers, Nigeria’s First Internationally Certified Branded Computers.