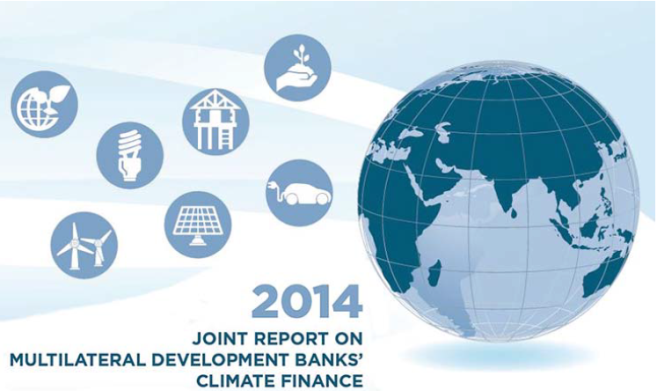 The leaders of the powerful G7 countries made headlines in June when they committed to a low-carbon growth path and formally recognized the need to reach zero net emissions globally before the end of the century.

They know it will require shifting trillions of dollars from carbon-intensive investments to low-carbon, resilient growth, and they called on the six big multilateral development banks (MDBs) to use “to the fullest extent possible” their balance sheets and their capacity to mobilize partners to increase climate finance for developing countries.

A new joint report from the MDBs examines the multilateral development banks’ climate finance commitments in 2014 and breaks down where and how the money was used. The analysis will help the development banks and their shareholders, partners and others as they work out how to meet the rising need for climate action.

Over the four years since they began joint reporting, the six MDBs have provided over $100 billion in climate finance through financial instruments including loans, grants, and guarantees, which have helped leverage additional private finance. In 2014, the latest reporting year, they committed a combined $28 billion toward climate finance, the largest one-year total since joint reporting began.

In all, 22 percent of the MDBs’ total finance involved climate action. “This joint report on climate finance shows our track record of mobilizing finance for energy efficiency, renewable energy, clean transport, water management and landscape management. We plan to do more,” said Rachel Kyte, World Bank Group Vice President and Special Envoy for Climate Change. “In particular, as the major channel of funding for adaptation we are concerned to increase investment in resilience where support is urgently needed now to support those who are most vulnerable.”

What gets measured gets managed Transparent, credible information on finance flows is essential to demonstrate the effectiveness of the work carried out. The MDBs’ channeling and leveraging of climate finance supports a mix of policy work and investments in both the public and private sectors with adaptation and mitigation benefits. Of the $28 billion committed in 2014, 82 percent was dedicated to mitigation projects that can reduce greenhouse gas emissions, and 18 percent went to adaptation projects designed to help countries adjust to the impacts of climate change and build resilience.

By region, the largest percentage of the MDBs’ cumulative financing went to developing and emerging economies in South Asia (21 percent), followed by those in Latin America and the Caribbean (17 percent), non-EU Europe and Central Asia (16 percent), Sub-Saharan Africa (15 percent), EU13 countries (12 percent), East Asia and the Pacific (10 percent), and the Middle East and North Africa (9 percent).

‘Africa Must Leverage Strengths to Accelerate Drive Towards Integration’