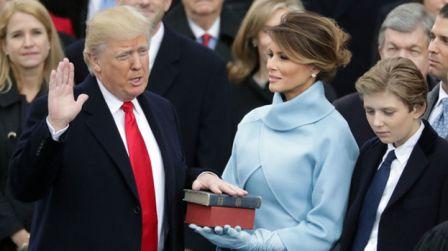 Last Friday, Donald Trump was sworn in as the 45th president of the United States, and as he settles into his new job there are a number of outstanding issues in the telecommunications industry he will likely address in the coming weeks, months and years.

Below are the top seven issues that President Trump will likely weigh in on throughout his administration, as well as speculation on what he might do.

First up on Trump’s to-do list is to name a new chairman to the FCC, the government agency that oversees everything from voice calling services to pay-TV offerings to spectrum allocation. President Barack Obama’s appointment to the position, Tom Wheeler, said last month he will resign today.

Industry observers believe Ajit Pai, who was appointed as one of two Republican commissioners on the FCC by President Obama, is likely to be selected by Trump to chair the agency. Trump met with Pai this week, according to Broadcasting & Cable.

And what might Pai focus on as chairman of the FCC? Earlier this week, Pai tweeted about a speech (PDF) he gave in Cincinnati last September where he said he wants to focus the FCC on finding ways to extend more broadband services to economically challenged areas by providing financial incentives for internet service providers to deploy gigabit broadband services in low-income neighborhoods.

However, according to a report in Multichannel News, Trump may implement far more aggressive changes to the FCC and its role in the telecom industry. Citing unnamed sources, the publication reported that Trump may be looking at ways to streamline the FCC and refine its focus by removing “duplicative” functions that might already be covered by other agencies like the Federal Trade Commission. Such a strategy appears to align with Trump’s campaign rhetoric about reducing government spending, past statements from some Trump advisers, as well as his selections for other government agencies like the Environmental Protection Agency.

One of Wheeler’s major accomplishments during his tenure as FCC chairman was implementing net neutrality rules on wireless and wireline carriers. And in his farewell speech last week he made one last case to defend the net neutrality rules that he championed. “Tampering with the [Open Internet] rules means taking away protections that consumers in the online world enjoy today,” Wheeler said last week. “What some describe as free market economics cannot simply mean freeing incumbents of their responsibilities.”

Wheeler added that a “hands-off approach to network oversight is more than a shift in direction, it is a decision to remove rights and move backward.”

But three of the five members of Trump’s FCC transition team—Jeff Eisenach, Mark Jamison and Roslyn Layton—have spoken out against net neutrality guidelines in the past, and Trump is widely expected to roll back government regulations like net neutrality. “Obama’s attack on the internet is another top down power grab. Net neutrality is the Fairness Doctrine. Will target conservative media,” Trump himself tweeted in 2014 (though, to be clear, Trump has shown he may not adhere to positions he has taken in the past).

“As an example of the power structure I’m fighting, AT&T is buying Time Warner and thus CNN, a deal we will not approve in my administration because it’s too much concentration of power in the hands of too few,” Trump said during an October campaign speech. However, a wide range of analysts and industry observers now believe Trump’s administration will approve the proposed $85.4 billion merger between media giant Time Warner and telecom heavyweight AT&T.

“While we expect there likely will be concessions (possibly a CNN spinoff, and continued infrastructure investment by T), from a legal standpoint, we note that if denied this deal would be precedent setting given the fact that no vertical merger in the TMT space has been denied,” Wells Fargo analyst Jennifer Fritzsche said in a research note this week. Fritzsche added that the relatively small amount of overlap in core business and expertise between AT&T and Time Warner likely means no major headcount reductions.

AT&T’s CEO Randall Stephenson has already met with Trump, though AT&T said the two did not discuss the company’s pending deal with Time Warner.

“Mr. Stephenson had a very good meeting with President-elect Trump earlier today covering a wide range of topics. AT&T’s proposed merger with Time Warner was not a topic of discussion,” the company said in a statement issued shortly after the meeting. “Rather, as the country’s leading investor of capital for each of the last five years, the conversation focused on how AT&T can work with the Trump administration to increase investment in the U.S., stimulate job creation in America, and make American companies more competitive globally.”

“[Trump] asked me straight up, ‘Has this regulatory environment been difficult for you guys.’ And I said it’s had a huge impact on how we think of investment in the U.S.,” Stephenson told CNBC after the meeting. “We talked about what the implications of what streamlining regulation would be.”

In general, Trump has discussed ways of loosening restrictions on businesses with the goal of increasing jobs, and an eventual approval of AT&T’s purchase of Time Warner could likely align with that strategy.

Although AT&T is expected to be successful in its bid to acquire Time Warner, it’s unclear how a Trump administration might approach other deals in the telecom space, mainly because Trump hasn’t set much clear or consistent precedent in his views on the space.

“According to Cowen TMT Policy Analyst Paul Gallant, early signs indicate benefits to cable/telcos, ISPs, and media companies via less regulation,” the analysts at Wall Street firm Cowen and Company wrote in an end-of-the-year research note. “That said, Trump’s previous lack of TMT policy positions, populism, and lack of FCC/DOJ clarity also inject a degree of uncertainty including M&A. While the likelihood of Sprint/T-Mobile has undoubtedly increased, we view a deal with skepticism believing the probability was higher the first time around in December 2013 for many reasons.”

Nonetheless, shares of T-Mobile and Sprint gained significant momentum in the weeks after Trump’s surprise electoral victory in November on Wall Street expectations of a possible matchup between the two. In fact, it’s exactly those expectations among investors that might sour a possible deal: “As the probability of bankruptcy has faded with Sprint’s recent refinancings, and as its stock price has risen with deal speculation, it has robbed itself of its best argument for allowing a merger,” the analysts at MoffettNathanson wrote in a recent note.

And even if the deal is finalized, Trump still may not go for it: “Certainly, on its face, a merger would be hard to sell to the DOJ even in a Republican Administration,” MoffettNathanson wrote.

Finally, beyond a Sprint and T-Mobile matchup, Trump’s administration will likely face a large number of other mergers and acquisitions in the telecom space in the coming months and years; most recently, reports indicate Verizon may be interested in nabbing a major cable player like Charter Communications or Comcast.

One of Wheeler’s key accomplishments as chairman was getting the incentive auction off the ground. The first-of-its-kind auction seeks to purchase spectrum from TV broadcasters in a reverse auction, and then release that spectrum to wireless carriers and others in a forward auction. Wheeler called the event a “spectrum bonanza” that could potentially bring in up to $80 billion from bidders keen to license low-band, 600 MHz spectrum ideal for covering large geographic areas.

However, the incentive auction isn’t raising anywhere near expectations, with Stage 4 of the reverse portion setting a clearing cost of just more than $10 billion for up to 84 MHz of airwaves, dramatically short of the $40.3 billion set in Stage 3 and marking a tiny fraction of the $86 billion set in Stage 1.

Indeed, the situation is such that Multichannel News reported members of Trump’s FCC transition team have even considered suspending the auction. (It is currently expected to end in March.)

Beyond the incentive auction though, the Trump administration will be able to weigh in on a number of ongoing spectrum proceedings, including the FCC’s much-lauded “spectrum frontiers” effort that seeks to free up a range of high-band spectrum for possible 5G networks. Other spectrum issues facing the administration include the rollout of spectrum sharing in the 3.5 GHz CBRS band (sharing that the wireless industry has largely opposed) as well as sharing in the 5.9 GHz band currently set aside for DSRC vehicle-to-vehicle communications.

Obama issued a Presidential Memorandum in 2010 through the NTIA to free up 500 MHz spectrum over the next 10 years for mobile and fixed wireless broadband use. Based on Trump’s statements and his general pro-business stance, it’s reasonable to assume his administration will work to release additional spectrum for commercial purposes. In fact, Trump’s pick for commerce secretary, Wilbur Ross, spoke of the need for more spectrum for commercial uses, as well as the importance of broadband infrastructure, during his confirmation hearing this week, according to Morning Consult.

However, exactly how that spectrum will be managed—and potentially shared—remains unclear.

One of Wheeler’s final regulatory efforts centered on set-top boxes in the cable industry. His “unlock the box” campaign was intended to require cable operators and others to open their video devices to services from other providers, thus potentially giving TV enthusiasts more video options.

Not surprisingly, the cable industry and deregulation proponents blasted the move:  “Unfortunately, these burdensome regulations would bring drastic changes to the marketplace that will likely have the reverse effect of harming consumers,” noted one Republican in July.

Although Trump hasn’t directly weighed in on the topic, it’s reasonable to assume a Republican-led FCC would drop the issue altogether.

Further, Trump’s administration could also have an impact on the wider pay-TV market in general, a market that Trump is already intimately familiar with through his Apprentice TV show. Though, again, it’s unclear exactly what positions a Trump administration would take in the space.

Creating new jobs in the United States remains a key goal for Trump, and his efforts on that front have already trickled down into the telecom industry. For example, Trump boasted in December that Sprint parent SoftBank would invest $50 billion in the U.S. in an effort to create 50,000 jobs. And in late December Sprint pledged to add 5,000 positions in the U.S. as part of parent company SoftBank’s effort.

A Sprint spokeswoman told The New York Times that the new positions would be “a combination of newly created jobs and bringing some existing jobs back to the U.S.”

And Sprint spokesman Dave Tovar told FierceWireless he didn’t know how many customer care positions the carrier has in the U.S. compared to offshore, adding that “it’s premature to speculate on specifics” of the announcement.

Trump has also boasted that an additional 3,000 jobs will be created by OneWeb. That startup recently closed a $1.2 billion fundraising round with SoftBank as the lead investor.

Trump appears to be driving his job-creation message in part by blasting companies he said are taking U.S. jobs overseas. For example, earlier this month he threatened Toyota with a “big border tax” if the company built a plant in Mexico. “Pretty much everybody is dreading being the subject of a tweet,” Kristin Dziczek, a spokeswoman for the Center for Automotive Research, told the Guardian. “Getting hauled out into the court of public opinion with virtually no warning is not something anybody wants to get engaged with.”

Although it’s in some cases difficult to discern whether such job announcements are straightforward new additions to the U.S. workforce or merely, as NBC News noted, recycled proclamations mainly geared toward currying favor with the incoming administration, the end result appears to be a renewed focus on companies’ hiring strategies. And that will likely have an impact on a telecommunications industry that is rapidly consolidating while also working to cut expenses.