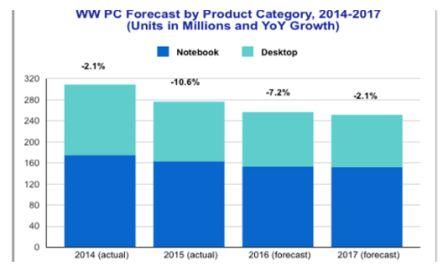 Official PC shipments to Nigeria fell 57.1% year-on-year in 2016 to total 156,511 units, according to the latest figures compiled by International Data Corporation (IDC).

This means the market has now fallen to its lowest levels since IDC started tracking it in Q1 2008, with factors such as unstable exchange rates, poor economic performance, and the steady rise of refurbished gray market imports causing a decline that has been ongoing since 2013.

“Nigeria’s currency – the naira – has been losing considerable value against the U.S. dollar for a number of years now,” says Babatunde Afolayan, a Senior Research Analyst at IDC West Africa.

“To make matters worse, the government excluded IT products from accessing foreign currencies at the interbank rate, pushing channel partners to obtain foreign currencies from the unofficial market, where rates are typically 40–50% higher.”

The country’s poor economic performance goes hand in hand with the tumbling value of the naira, with low crude oil prices and on-going militant and terrorist activities further compounding the issue. Afolayan says such factors have significantly weakened the purchasing power of end users, resulting in low demand for PC products.

“Both commercial and consumer end users have been prolonging their PC lifecycles beyond what is generally considered normal,” he says.

“And in cases where new purchases are being made, commercial end users are typically opting for cheaper models while consumers are increasingly opting for refurbished products. An additional challenge is that channel partners are no longer stocking units to meet future demand; PCs are now ordered on a need-to-supply basis, and only after orders have been fully paid.”

The import of refurbished PCs – primarily from the UAE, the U.K., and China – is proving particularly challenging for official channels, with such products comfortably outnumbering official shipments of primary PCs.

“At the same time, the volume of gray market imports is steadily increasing,” says Afolayan. “One of the main reasons is the lower price points at which resellers can purchase products from gray market sources, giving them better profit margins than official channels.”

The government is continuously trying to improve the country’s economic performance and has implemented various strategies aimed at increasing the purchasing power of end users. Meanwhile, the Central Bank of Nigeria is considering the inclusion of IT products for interbank rates when it comes to accessing foreign currencies.

“Such efforts are expected to drive a recovery of sorts in Nigeria’s PC market,” says Afolayan. “We anticipate a leveling off in 2017 as foreign exchange rates stabilise and IT decision makers begin to renew spending as most of their products will have passed the end of their life spans. IDC forecasts that this relatively flat growth in 2017 will be followed by a much stronger year-on-year increase of 59.9% in 2018.”

NCC: Inside the N345bn Revenue Haul in 5 Years