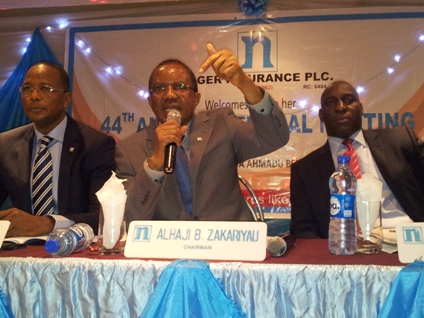 Niger Insurance Plc has paid out over N270.8 million as dividend to shareholders for the financial year ended December 31, 2015. The dividend payout came to N3.5 kobo per 50 kobo share.
Mr. Hamisu Abubakar, Chairman, Niger Insurance Plc, said at the 46th Annual General Meeting [AGM] in Abuja that the payout was in keeping with the tradition of the company despite he harsh operating environment in the country.
Abubakar said the company recorded Profit Before Tax of N704 million in the period under review as against N638.4 million in 2014. For the Group, he operating Profit Before Tax stood at N736 million compared to N644.7 million, a growth of 14 per cent. The net premium income was N10.5 billion while total assets stood at N20.3 billion. In the same vein, the company’s total liabilities went down from N14.2 billion to N12.1 billion in the same period.
Going forward, the Niger Insurance chairman said:
“The Board has begun discussion with a view to diligently pursue foreign partnership initiative in the coming year. And we are seeking the support of shareholders to consolidate any agreeable arrangement which will be made available in due course.”
He was optimistic that mergers, acquisitions and restructuring in the insurance industry would continue in the year.
“The management is determined to turn these developments into market opportunities for the company. We look forward with greater confidence and optimism. The company has put in place strategies to be able to convert opportunities as they occur in the years ahead.”