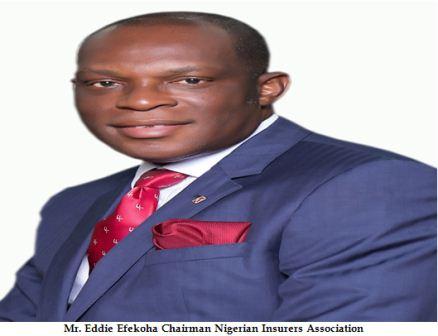 Mr. Eddie Efekoha, Chairman, Nigerian Insurers Association [NIA] says creation of employment to increase the purchasing power of Nigerians, curbing inflation and implementation of economic policies to stimulate economic growth  as well as tax incentive for certain insurances are key paths to sustainable growth of the insurance sector in Nigeria.

Efekoha said in a paper titled ‘THE INSURANCE INDUSTRY IN NIGERIA AND CAPACITY FOR BUSINESS EXPANSION’ that the federal government and the National Insurance Commission [NAICOM] should also support the industry through enforcement of compulsory insurances, creation of stricter solvency regulation, implementation of risk based supervision,

operators to grow reserve from annual operational profits in other to increase their financial / underwriting capacity, a more aggressive industry-wide awareness and publicity campaign,  collaborative investment in technology to improve insurance distribution to reduce management expenses and thus increase profitability.

The NIA chairman added that right pricing of insurance products, development of innovative insurance solutions/products to increase penetration, review of reinsurance arrangement for better coverage, reduce risk volatility and cover new risks such as sabotage, kidnap as well as  formation of strategic alliances to increase capacity and deepen insurance penetration will also support the growth of the insurance sector in the long-term.

Reviewing the journey of the industry over the years, Efekoha said:

“The industry in the 90s and well into 2005 was characterized by under-capitalisation, fragmentation and negligible size preventing it from taking on larger risks. In September 2005, a new capitalisation requirement was announced for insurers and this was concluded in February 2007. This recapitalisation exercise changed the playing field for insurance operators.

Between 2007 and now, the market has witnessed several mergers and acquisitions which have grown the local capacity. Also, the industry has been a toast of foreign investors with a direct investment estimated at $750 million as at December 2014.”

He lamented the challenges facing the industry, saying the growth of a particular sector in any given economy is directly related to the performance of the economy of that country. He said from a rebased Gross Domestic Product [GDP] of $500 billion, the country’s GDP went down to $296 billion, making Nigeria the second largest economy in Africa after two years at the top.

“A quick look into our national dailies would reveal the dire situation of the economy-terrorism, insecurity & kidnapping amongst other social maladies: With the Boko Haram terrorist group ravaging the North-East, the militants in the South-South vandalising oil and gas facilities, this has affected the economic growth thereby reducing national income, power generation and leading to budget deficit.”

Efekoha, who is also the CEO of Consolidated Hallmark Insurance Plc, said the aggregation of such negative factors will naturally impact the insurance sector adversely and stunt its growth. “Devaluation of the Naira and its effect on insurance stock price and capital base-our ability to underwrite is a function of our financial strength which in turn is a function of the prevailing economic realities.Other very disturbing issues about our economy include:  slump in the global price of crude oil & crude oil over-supply, weakening of the country’s external reserves position, rationing of forex amongst eligible applicants, poverty/reducing consumer purchasing power, inconsistent economic policies and volatile capital market.”

He said technology will continue to be vital element of business growth and expansion just as the inability of insurers to become digitally responsive and provide clients with quick, efficient and prompt services has in past years made the industry to lag behind. He added however such challenge cannot be beyond the control of the industry, if only it can embrace technology to drive growth as that could also be the reason for poor innovation in the industry.

Efekoha warned that huge and rising claims eat deep into the reserves of insurance companies, forcing them to reduce risk appetite and also reject certain classes businesses deemed volatile. He was emphatic that should claim costs continue to rise, insurance companies could be at the risk of having little capital to do business.

“Insurance is all about sharing of risks guided by laid down principles and given our population, right leadership that is focused on the issues of power, infrastructural development/renewal, broadening of revenue base, the dogged stance of NAICOM to drive growth and ensure strict compliance with relevant laws and operators who are determined to play according to the rules then insurance industry cannot but be the toast of investors and grow at double digits.”