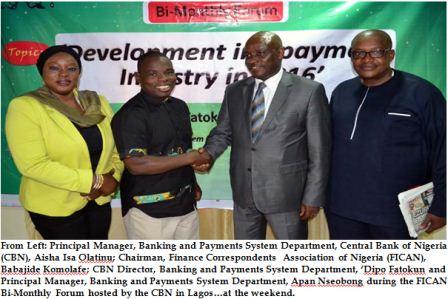 The Central Bank of Nigeria (CBN) has disclosed on-going plans to extend Bank Verification Number (BVN) registration project to customers of Other Financial Institutions (OFIS) such as Microfinance Banks (MfBs), Primary Mortgage Institutions (PMIs), among others.

CBN Director, Banking and Payment Systems Department, ‘Dipo Fatokun who disclosed this at the Finance Correspondents Association of Nigeria (FICAN) Bi-Monthly Forum hosted by the apex bank in Lagos, at the weekend, said the OFIS operators are already angling to have their customers included in the BVN project.

He said the CBN is considering having the OFIS customers enroll through deposit money banks, because of the high cost of procuring the machines.

“We are considering using commercial banks as registration points for the OFIS customers. We also expected that many of the OFIS customers, who already have their BVNs will supply the data to their banks, while others without BVN will register afresh,” he said.

Fatokun said the BVN project, which is being coordinated by CBN, commercial banks and Nigeria Interbank Settlement System (NIBSS) has helped reduce the number of bank frauds in the industry.

The CBN director explained that that before the coming of the BVN, identifications previously used in the banking industry were not foolproof, with fraudsters easily go unidentified.

However, BVN has now made it easier for the CBN and banks to uniquely identify every customer or to be able to trace transactions when frauds are committed. He explained that no bank customer, including Nigerian bank customers in Diaspora, is authorised to have more than one BVN.

“I want to assure you that the BVN has assisted us a lot in the banking system. It has assisted us to check frauds, and we are working on a framework, that will enable us if not to blacklist customers, because of some legal implications, but at least to watch-list a customer that is identified to have been fraudulent, or have done what he is not supposed to do across the banking sector,” he said.

Fatokun, who spoke on the theme: ‘Recent Developments in the Electronic Payments System and Implications for Consumers of Electronic Payment Services’ said the CBN has been at the forefront of the transformation of the payments system in the country which has been demonstrated through the development of the Payments System Vision (PSV) 2020 document in 2007, which was reviewed in 2013.

The CBN Director said the number of BVN linked to customers’ accounts as at August 23, this year was 36.7 million while the total number of individual customers in the banks was reported as 59.9 million as at the same date.

“Any bank customer resident in Nigeria without a BVN would be deemed to have inadequate KYC while effort is on-going to ensure that customers of Other Financial Institutions (OFIs) such as Microfinance Banks (MFBs) and Primary Mortgage Institutions (PMIs) are brought into the system begin to get their BVNs,” he said.

Fatokun said the e-Payment remains an initiative of CBN under the Payments System Vision 2020 as part of the overall FSS 2020 Strategy adding that one of the CBN mandates is the promotion of a sound financial system (Section 2 (d) of the CBN Act 2007).

He disclosed that Section 47(2) of the CBN Act 2007, stipulates that the CBN shall continue to promote and facilitate the development of efficient and effective systems for the settlement of transactions, including the development of electronic payment systems, adding that the promotion of a sound financial system entails active support for the effectiveness, efficiency and systemic safety of the payments system.