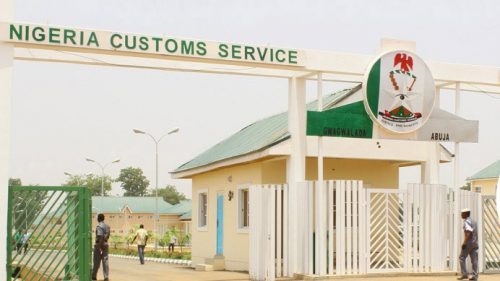 As Nigerians grapple with rising food prices amid aggravated level of insecurity in the country, there is growing concern that arbitrary imposition and implementation of import and excise duties by the Nigeria Customs Service (NCS) could indeed be a key factor in the high cost of food and associated items in the country.

For instance, in December 2021, the South-East Amalgamated Markets Traders Association (SEAMATA) raised alarm and flatly rejected what it called unreasonable increase in import duty imposed by the NCS on imported cargoes into the country.

In a statement signed by Chief Gozie Akudolu, President-General and Mr. Alex Okwudiri, Secretary-General of SEAMATA, the traders’ body accused the NCS of bad faith in calculating import duty payment on 40ft containers as against what was earlier agreed to by both parties.

The statement by SEAMATA read in part:

“Between 2020 and now, the amount charged on cargoes as import duties has risen in geometric proportion from N750,000 to N2 million, again to N3 million and presently, to N3.3 million for 40ft containers; while 20ft containers jumped to N1.8 million. The Nigeria Customs, on their own, work out payable import duty now based on ‘estimated’ invoice value of consignment as against the actual invoice value of goods from the country of origin.

This development is not only bringing untold hardships to importers but also compounding the pains of the citizens as it dovetails to astronomical increase in prices of imported goods as the Nigeria Customs Service estimated invoice value is always far above the actual cost of the imports. The indiscriminate estimate of value of goods by Nigeria Customs Service is adversely affecting the price of goods in the markets today. We are appealing to the Honourable Minister of Finance, Budget, and National Planning to prevail on the Nigeria Customs Service to, as a matter of urgency, suspend the exercise. This is to save Nigerian citizens from further economic hardships as further economic pains that follow such situations could lead to social unrest, which our nation doesn’t need now.”

Recently, the National Bureau of Statistics (NBS) put the inflation rate in Nigeria at 19.64% in July 2022, the highest level in 17 years, from 17.7%in May, raising fears that millions of Nigerians could fall deeper into poverty. The NBS report also stated that the composite food index rose to 20.60 percent in June 2022 on a year-on-year basis.

Counting the Cost on Businesses

Businesses operating in Nigeria remain on the verge of collapse and bankruptcy due to a long list of anti-business policies ranging from multiple taxation, unreliable power supply leading to massive investment in generating sets, high cost of diesel and the prevailing unreasonable import duty charges of the Nigeria Customs Service etc.

When the outcry on multiple taxation became louder, the Federal Inland Revenue Service (FIRS) claimed that amendment to Section 68 of FIRS Establishment Act by the Finance Act 2021 has settled the matter of multiple taxation.

The Executive Chairman of FIRS, Muhammad Nami said: “The amendment to Section 68 of the FIRS Act by the Finance Act 2021 has made it clear that FIRS is the only agency responsible for tax assessment, collection, and enforcement. As such, taxpayers are to expect a streamlined tax administration regime going forward.”

Quite recently, Mr. Ebrima Faal, Director, African Development Bank (AfDB) in Nigeria put the cost of running generating sets in the country (generators + Fuel) at $14 billion, lamenting that the power sector has not improved even marginally despite the process of privatisation.

But the huge power burden on businesses in Nigeria was better explained by the former Director-General, Lagos Chamber of Commerce and Industry (LCCI), Mr. Muda Yusuf:

“The cost incurred to provide alternative sources of power are inevitable if industrialists are to remain in business in Nigeria. This, perhaps, is the biggest single factor impeding the growth of industrialisation.

“The issue has made our industries very uncompetitive in recent times. That is one of the reasons our industries cannot produce for export unlike their counterparts abroad. Also, our industries contribute less than 10 per cent to the country’s Gross Domestic Product (GDP.)”

The International Monetary Fund (IMF) also lamented that Nigeria has suffered economic losses of over $29 billion due to lack of access to regular supply of electricity.

A major consequence of this unfavourable business climate is that businesses, especially manufacturers will shut down because of high cost of production.

Indeed, a report by the Nigerian Chambers of Commerce, Industry, Mines & Agriculture (NACCIMA) stated that 800 companies closed shop in Nigeria in a period of just three (3) years: 2009 to 2011. Secondly, the decision of the Central Bank of Nigeria (CBN) to limit official forex access to importers of prohibited 41 items also led to the collapse of 272 companies, with 50 of them manufacturers according to the Manufacturers Association of Nigeria (MAN). Another 222 small-scale firms also shut down for the same reason, leading to over180, 000 job losses.

The job losses attracted the attention of the NBS which says the country’s unemployment rate rose from 27.1 percent in the second quarter of 2020 to 33 percent in March 2022.

Can Manufacturers Save the Day?

It has been proven in other climes that manufacturing is the productive bedrock of any sustainable economy. In essence, Nigeria cannot record higher level of Gross Domestic Product (GDP) and better living conditions for its people without favourable industrial policies and substantial investment in manufacturing.

And as food prices become unreachable to millions of families, there is a consensus that the right policy framework, especially for the wheat milling and food processing industry in the agricultural value chain for instance, could unlock the productive capacity of that sub-sector, leading to massive food production, supply, and raw materials for industries. This would naturally translate to food security for millions of Nigerians and generate job opportunities in the economy.

The Need for FG Intervention

Given the present state of the economy in terms of food inflation, closure of manufacturing firms due to inputs and unemployment amongst others, it becomes imperative for the Federal Government to intervene through immediate reversal of the existing anti-business policies of its agencies, especially the NCS.

In this regard, manufacturers and importers are therefore seeking the Federal Government’s intervention on import duty valuation of some critical raw materials as they believe that the NCS has already overstretched them by basing duty valuation on spot price in place of the transaction value of critical imported commodities.

It also important for the Federal Government to address the serious allegations of arbitrary fixing of duties on importers of food related items given the rising tide of food inflation in the country today.

Specifically, some manufacturers have variously accused the NCS of deploying uneconomic and arbitrary system of arriving at the duty value of goods in form of relying on the current Spot prices as a benchmark. They allege that such method of value and duty computation via the Consumer Price index (CPI) model drives up the cost of duty payable on such goods and has direct impact on the cost of production and consumer food prices.

Beyond the complaints and lamentations, there is the need for stakeholders in the economy such as NACCIMA, MAN, LCCI and other relevant industry bodies to seek immediate audience with the leadership of the Nigeria Customs Service to openly discuss the negative impact of the prevailing custom duties and tariff on the manufacturing sector and larger economy.

Such a parley will provide each side the opportunity of one-on-one interaction to critically analyse the issues and find amicable solutions to the problem areas.

It will also create an enabling environment for future engagement between them in the interest of the sector and national economy.

The Abidjan-Lagos Corridor: A Catalyst for Economic Growth in West Africa