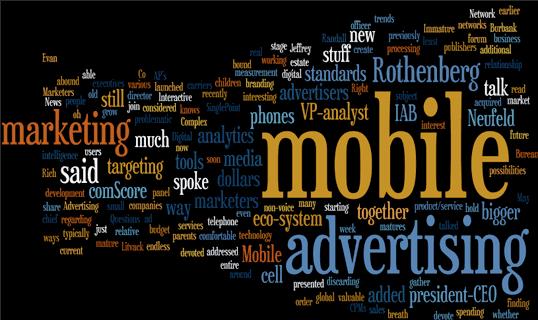 “The mobile advertising market took off even faster than we expected due to an increased uptake in smartphones and tablets, as well as the merger of consumer behaviors on computers and mobile devices,” said Stephanie Baghdassarian, research director at Gartner. “Growth in mobile advertising comes in part at the expense of print formats, especially local newspapers, which currently face much lower ad yields as a result of mobile publishing initiatives.”

“Smartphones and media tablets extend the addressable market for mobile advertising in more and more geographies as an increasing population of users spends an increasing share of its time with these devices,” said Andrew Frank, research vice president at Gartner. “This market will therefore become easier to segment and target, driving the growth of mobile advertising spend for brands and advertisers. Mobile advertising should be integrated into advertisers’ overall marketing campaigns in order to connect with their audience in very specific, actionable ways through their smartphones and/or tablets.”

Geographical regions will also evolve at a different pace and in different directions. Historically, the atypically large adoption of handsets for digital content consumption in Japan and South Korea has given the Asia/Pacific region an early lead in mobile advertising worldwide. Looking forward, the high-growth economies of China and India are expected to contribute increasingly to mobile advertising growth, as their expanding middle classes present attractive markets for global and local brands.

However, North America and Western Europe will close the gap on Asia/Pacific as the mobile channel gets more and more integrated with 360-degree advertising campaigns, eating up budgets historically allocated to print and radio. Consumer multitasking will drive preference for multiplatform approaches, which will blur the lines between channels and make it difficult to eliminate category overlap. In the rest of the world — Latin America, Eastern Europe, and the Middle East and Africa — mobile advertising growth will be aligned with technology adoption and the stabilization of emerging economies, but will mostly be driven by large markets such as Russia, Brazil and Mexico.

Different types of mobile advertising are evolving at a different pace and in different directions. Mobile search — including paid positioning on maps and various forms of augmented reality, all of which can be informed by location — will contribute to drive mobile ad spending across the forecast period, although it will diminish in strength as the period progresses. Gartner believes that mobile display ad spending will grow and take over from mobile search. It will initially remain divided between in-app and mobile Web (in-browser) placements — reflecting consumer usage — although after several years of in-app dominance, Web display spending will take over in-app display from 2015.

The rapidly growing share of time that consumers spend on mobile devices is generating ad inventory at a pace considerably faster than most advertisers can shift their spending to the medium. This creates a surplus condition that is driving down unit ad prices which in turn has led to a situation in which a significant portion of mobile ad inventory is taken up by app developers paying for ads to promote their apps and get them more downloads, a category known as “paid discovery.” While the revenue basis of paid-for app store downloads provides some economic justification for this category, for many developers the outlay for ads is close to their maximum ad income or even exceeds it.

This creates a circumstance, reminiscent of the early days of Web advertising, in which cyclical advertising arrangements among websites produced an inflated picture of revenue that may ultimately prove to be a bubble. “Some correction in the growth rate must occur before demand from brand and local advertisers catches up with supply, and more sustainable economics support a faster growth rate commensurate with consumer adoption,” said Ms. Baghdassarian.