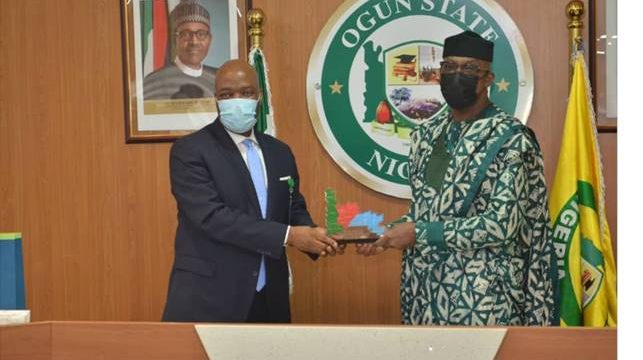 The management of Ecobank Nigeria has made a firm commitment to partner and collaborate with Ogun state government in the various sectors of the economy. Managing Director, Ecobank Nigeria, Patrick Akinwuntan made the pledge at the Executive Council chambers of the Governor’s office, Oke-mosan, Abeokuta during a courtesy visit on Governor Dapo Abiodun last week. At the event, the bank also donated rural health tricycle ambulances to the state, to assist in primary healthcare delivery.
Akinwuntan, who hinged the bank’s visit to the state on partnering with the state government on the policy thrust and developmental strides of the Dapo Abiodun led administration, said “For us as a bank,we appreciate what your government is doing. When we look at the specific components of your vision and strategy as encapsulated in ISEYA, which represents Infrastructure, Social welfare and health, Education, Youth empowerment and Agriculture, we decided to come over to explore areas of partnership and collaboration. Your government has not left the vision as an acronym but the execution is a testimony to the greatness of this state. We believe the outcome of this collaboration will benefit not just indigenes of Ogun state alone, but our dear country Nigeria and the Africa continent.”
Specifically, the Ecobank managing director reiterated that Ogun state is one of the leading lights in ease of doing business amongst all the states in the federation, assuring that the bank will help attract funding for long term projects. “I want to also commend your government in terms of peaceful environment of doing business. Ogun state is one of the leading lights in ease of doing business and a place to invest in.” “I will like to reiterate that we stand ready to support you in attracting investments to fund the long-term infrastructure projects that you have rightly embarked on.” “We understand that such projects will require long-term financing, the history and rating of Ogun state places it in a unique position to leverage on the capital market for long term instruments like bonds. We stand ready to collaborate and support you on this journey,” he said.
He commended the state government’s Private Public Partnership (PPP) approach of handling projects, assuring that the bank is ready to deploy its expertise and support in the areas of empowering women businesses, Micro, Small and Medium Enterprise (MSMEs), agriculture, health and other strategic sectors of the state’s economy.
The governor, His Excellency Prince Dapo Abiodun, in his remarks called on Ecobank and other financial institutions in the country to join hands with the state government to fix the Lagos/Agbara and Ota/ Abeokuta federal roads. He disclosed that his administration was on the verge of getting federal government’s approval to embark on the rehabilitation of the roads through the PPP model.
“Let’s see what you can do for us in terms affordable housing through mortgage schemes, advertising on our job portal, Infrastructure. I am sure you are aware of the Agbara corridor which is the biggest industrial hub in this country; the road leading from Lagos to Agbara is a nightmare; that road is a federal road, but we have decided to take on it as a State.” “We have decided to take it over and construct it under a PPP arrangement.” “We hope Ecobank will perhaps be interested in this PPP model in partnership with other banks. The same goes for the Ota-Abeokuta road,” the governor said.

Abiodun also noted that his administration was looking at supporting vulnerable groups in the society through the provision of single digit or zero interest loans. He called on Ecobank to partner with the state government in providing loans that would help the beneficiaries improve on their businesses.
“We are looking to support our vulnerable groups in the society, our women who are basically the strength of the society, they are very hard-working, and all they need is little capital.” “We aim to provide loans for them at single digit or zero interest rate and we know that they will pay back. They are religious about paying back. Let’s see how we can work with Ecobank to design a model that will allow us to support them,” he stated.
Other members of the bank’s visiting Executive Management Team include the Executive Director, Commercial Banking, Carol Oyedeji ; Head, Consumer Banking, Korede Demola- Adeniyi; Segment Head, Public Sector/AgriBusiness, Mojisola Oguntoyinbo; Regional Head, South West/Mid-West, Christopher Olusola; Regional Manager, Public Sector, South West/Mid-West, Victor Inyang and Business Manager, Abeokuta branch, Olusegun Makinde.