The swearing in of Nigeria’s new president Muhammadu Buhari has led to renewed optimism regarding economic progress in the country and new opportunities for the private sector, particularly in infrastructure development, consumer and financial services sectors.

Four prominent businessmen, visiting Cape Town, South Africa for the World Economic Forum 2015, discussed the economic outlook for Nigeria under its new government at a breakfast hosted by RMB Nigeria. Christian Wessels, Deputy Group Managing Director of TGI Group, a leading Nigerian conglomerate, is confident that a more entrenched democracy has been established in Nigeria and sees the greatest opportunities in providing appropriate goods and services to a population of 175 million people.

“There are numerous opportunities for private sector producers to cater for different price points, tastes and regional preferences. We hope the new government will act against smuggling which will help local producers,” he says. “The new president needs to increase government efficiency and diversify the economy away from its reliance on oil.”

Wessels believes the future creation of jobs rests on three sectors: agriculture; consumer; and financial services. “We have enough land to create a strong agricultural sector, while the consumer market is currently underserviced and underpriced offering numerous opportunities for job creation. Financial services is also under-serviced with only 30%- 35% of Nigerians having bank accounts,” he says.

“Government has limited financial resources so would be open to private sector participation particularly in infrastructure projects,” says Uche Orji, MD and Chief Executive of the Nigeria Sovereign Investment Authority which manages the Nigerian sovereign wealth fund. “Also, many Nigerian assets do not have a strong cash flow and would welcome private sector participation, such as a stock exchange listing, to get them going again.” 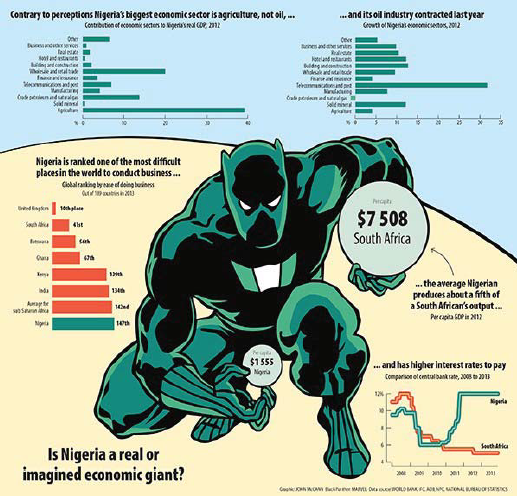 In the longer-term, Orji sees small and medium enterprises growing as government addresses the power issues, as well as a strengthening democratic system which will, in turn, strengthen democratic institutions such as the Development Bank of Nigeria, therefore facilitating easier investment into the country. One of the biggest challenges the new government faces is diversifying its economy away from its significant reliance on oil to support its fiscal recurrent expenditure.

“There has been a lot of talk about lifting the oil subsidy and what happens next will be a litmus test as to what the new government plans to do,” says Andrew Alli, Chief Executive of Africa Finance Corporation, which finances infrastructure projects across Africa. “I believe an immediate abolition with a six month window would be the best thing to do.” Alli’s other suggestion for change would be to possibly float the Nigerian naira against the US dollar.

“The new government is not much different ideologically to the previous one, but the difference will come in how they execute things and what they prioritise.” Alli is bullish on a longer-term basis saying that the next 12 to 24 months raise some concerns. “One of the keys to success for the Nigerian economy is the ability to create jobs particularly for the 70% of the population who are under 30. Just to remain at an unemployment rate of around 6% and under-employment of about 25%, we need to create millions of jobs annually,” he says.

“Another factor to watch for the longer term is how to use technological innovation to leapfrog the infrastructure which we don’t already have.” The financial services sector is also expected to experience improvements as the Central Bank of Nigeria introduces international banking standards such as Basel 2 and 3. “We see an embracing of change in the sector,” says Michael Larbie, RMB Nigeria Chief Executive and RMB Regional Head West Africa.

“Changes are also taking place to address potential increases in the industry’s non-performing loans (NPLs). With the strict adherence to 5% NPL ratios, opportunities will arise in repackaging and selling off any troubled assets to willing buyers.” Larbie believes a more diversified economy and improved power supply will increase productivity and prices. “If we take care of security in the north of the country, it will open up other sectors within the economy such as mining.”