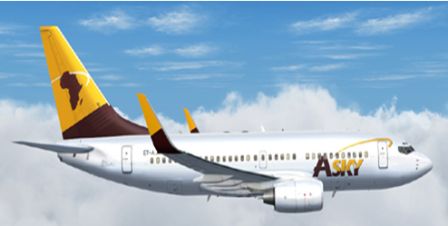 ASKY, the Pan-African Airline with the largest network in West and Central Africa, has the pleasure to announce that it is the recipient of the African Airlines Association (AFRAA) Airline of the Year Award for Regional Operations at the AFRAA 48th Annual General Assembly held on November 20-22, 2016 at Victoria Falls in Zimbabwe.
The AFRAA annual awards recognise excellence in service delivery, innovation and competitiveness in airlines.
“It is a great honor for all of us at ASKY to be recognized as the 2016 African Regional Operator of the Year by our Association. I wish to thank all my colleagues for their tireless efforts and contribution in enabling the airline to achieve this success. This award is a validation of our business model as well as the exemplary Pan-African strategic partnership we have with Ethiopian Airlines. It also encourages us to redouble our efforts in ensuring better services and air connectivity to the travelling public in West and Central Africa”, said Henok Teferra, CEO of ASKY.

About ASKY
ASKY is a Pan-African Airline that was created by regional institutions including the Bank for Investment and Development (EBID), the West African Development Bank (BOAD) and the ECOBANK Group.

ASKY is a commercial company under private law and is managed by experienced professionals from Africa.
ASKY recently received the Award of « THE MOST PROMISING AIRLINE OF THE YEAR » by the Ghana Aviation Award held on July 29, 2016 in Accra, Ghana.
The Pan-African airline operated its first flight in 2010, and currently covers a network of 22 destinations in 19 countries with one of the youngest fleet in the region composed of eight aircrafts, including three Boeing 737-700, one Boeing 737-800 and four Bombardier DHC-8-400.