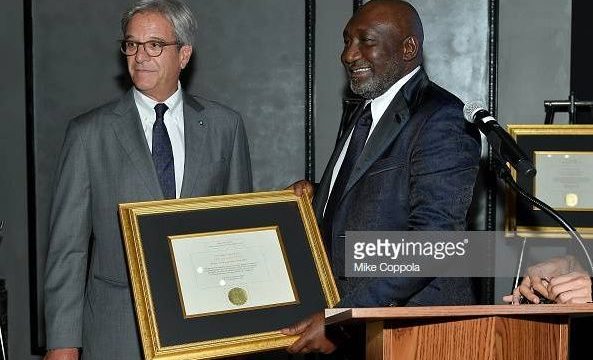 International business leader and founder of Aiteo Group, Benedict Peters was awarded Africa’s Oil and Gas Leader of the Year at the Forbes Best of Africa Gala which held at Forbes Headquarters, New York City on September 27, 2018.

The award is an acknowledgement of Peters’ significant contribution to oil and gas development in Africa by visionary leadership, distinguished service and transformational realignment of a sector dominated by International Oil Companies. The Forbes Award also recognised Mr. Peters’ commitment to bettering the lives of people and societies across Africa by philanthropic engagement.
On presenting the award Mike Perlis, CEO and Vice-Chairman of Forbes Media said, “recipients are singled out for their work in bringing prosperity to all 55 countries of the African continent”.
According to the Editor, Emerging Markets for Forbes, Paul H. Trustfull, “Peters’ ascendancy in Africa’s Oil and Gas sector has been exemplary as well as revolutionary. His company, Aiteo, has thrived for about two decades – going from a downstream start-up to becoming a leading integrated energy conglomerate with strategic investments in hydrocarbon (or commodities) exploration and production.”
Peters reinvented himself in times of great personal challenge. He resurrected his identity and reputation while battling injustice. He proves that inspirational leadership in a difficult industry is possible.” Trustfull added.
Dedicating the coveted award to all Aiteo employees worldwide, Benedict Peters said “The acknowledgement by Forbes as Oil and Gas Leader of 2018 is inspiring. It means a lot to me and the entire Aiteo Group. I am delighted that the International community recognises our contribution towards Africa’s self-sufficiency in energy and our aspiration to become a reference point for indigenous capacity in oil and gas. This award motivates us to broaden our vision for the continent, despite all odds, and accelerate her economic transformation. We believe that Africa has what it takes to lead the world and we will continue to push the frontiers of development through our investments in people and technology. The success of our Oil and Gas Upstream subsidiary proves that the future we envision in Africa rests to a large extent in the hands of Africans.”
Peters ventured into the oil and gas sector as an entrepreneur in 1999 and initially traded mainly in the downstream sector.
Aiteo is currently the highest producing indigenous oil E&P company in Nigeria.
In 2015, Benedict Peters consolidated Aiteo’s asset portfolio with a $3 billion acquisition of sub-Saharan Africa’s largest onshore block (OML 29).

Subsequently, Aiteo optimised the asset’s yield from 17,000 barrels of oil per day (bopd) to almost 70,000 bopd within the year of the asset’s acquisition. The largest indigenous energy provider currently peaks production at around 100,000 bopd, doubling its initial asset value to $6 billion within three years.

The company plans to invest another $4.3 billion acquiring additional offshore assets with a projected total output of 250,000 bopd in the short to medium term.
Beyond oil, the Aiteo Group has investments in mining, agriculture, infrastructure development, electricity generation and distribution, with a fast-growing retail distribution network. It is focused on serving the needs of communities across the continent by leveraging a unique combination of a strategic asset base, technology, innovation, and some of the best technical and business minds across the industries it operates in.

The group has been expanding rapidly, to extend its operations to different countries across Africa and beyond with emerging international presence in the DRC, Ghana, Guinea, Liberia, Zambia, Zimbabwe as well as offices in Geneva and Paris.
Peters is passionate about youth empowerment and has donated generously to support football on the African continent. Through Aiteo, he sponsors the Nigerian Football Federation, CAF Awards, Aiteo Cup (the Federation’s foremost tournament in Nigeria) and a football team in his company’s host community. He has also assisted thousands of internally displaced persons in northern Nigeria while supporting clean water sanitation initiatives in Africa, in partnership with Face Africa, improving the lives of over 25,000 people in rural Liberia. Peters addresses social and environmental issues in the agricultural sector through the Joseph Agro Foundation, set up in July 2014 to tackle chronic unemployment and water shortage.
In recognition of his groundbreaking contribution to development, Peters was one of four recipients of the Marquee Award for Global Business Excellence at the Africa-US Leadership Awards in 2014. In the same year, he received the “Leadership CEO of the Year” award.

In 2015, Peters was conferred with the Dr. Martin Luther King Jr. Legacy Awards in the “Economic Empowerment” category. And was listed as one of the ‘50 Most Influential Nigerians in 2017’ by BusinessDay. More recently,  he has been recognised as the  ‘Oil and Gas Man of the Year’ at the prestigious 2018 Guardian Awards.