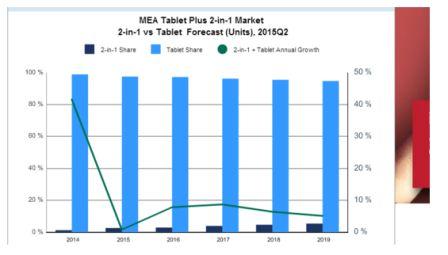 The Middle East and Africa (MEA) tablet market continues to decline in the face of cannibalisation from larger-screen-size smartphones.

According to the latest Middle East and Africa Quarterly Tablet Tracker from International Data Corporation (IDC), tablet shipments in MEA dropped 10.1% in the third quarter of the year (Q3 2016) when compared with the same period in 2015.

While shipments were down year on year to 3.85 million units, this still marked an improvement on the 3.52 million units shipped in Q2 2016.

“Smartphones with large screen sizes meet most needs of today’s consumers, who are slowly moving their tasks to these devices,” says Fouad Rafiq Charakla, Senior Research Manager for Client Devices at IDC MEA.

“The continuation of low crude oil prices in the Middle East and currency shortages in several African countries are compounding the problem, eventually leading to weaker consumer sentiment.”

Samsung continued to lead the MEA tablet market in Q3 2016 with 17.6% share, despite the vendor’s reduced focus on the category leading to a 34.3% year-on-year decline in its shipments. Lenovo maintained second position with 13.5% share, up from 12.9% in the previous quarter but down 6.8% on Q3 2015. Huawei followed just behind in third place after increasing its focus on tablets in the region. This resulted in year-on-year growth of 102.8% for 13.5% share. Apple finished fourth with 7.9% share, reflecting a year-on-year decline of 34.6% in shipments, while local vendor i-Life took fifth position with 5.5% share, its success stemming from the popularity of its low-priced consumer products.

“This category offers quite low margins, so the focus on tablets from the supply side is also declining. Many vendors have cut their tablet lineups accordingly, and there don’t appear to be any exciting or innovative developments on the immediate horizon to spur purchases in the tablet space.”

“It’s worth nothing that with little difference between older and newer generation tablets, consumers are typically content with their existing hardware and subsequently holding onto it for a longer period of time,” continues Dogra.

“Free operating system updates ensure that these tablets remain essentially as good as new, so there is little or no motivation for consumers to replace their current devices.”

IDC has revised its overall forecast for 2016 downwards, with 14.49 million units now expected to be shipped for the year. This is down from the previous forecast of 15.07 million units and represents a year-on-year decline of 7.5%. The main factor behind this revision is the significant reduction in the quantity of tablets expected to be shipped as part of the Digital Literacy School Program in Kenya.

Detachable tablets are gaining traction in the market, and shipments are expected to grow by 147.9% year on year in 2016, driven by increasing demand from consumers and the education sector. “Detachable tablets are typically better suited for education purposes than traditional tablets, as these devices are primarily based on the Windows operating system,” says Charakla.

“As such, they can smoothly run the Microsoft Office applications typically required by the education sector. There are also numerous low-cost options with this form factor, which is ideal for large education deals where budgets are tight.”