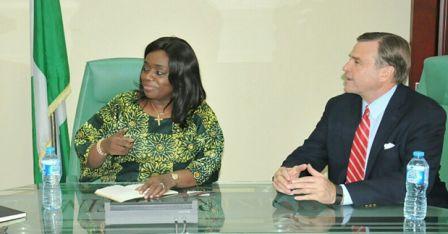 The Minister of Finance, Mrs. Kemi Adeosun on Friday reaffirmed the commitment of the Muhammadu Buhari-led administration to return the economy on a path of sustainable growth having weathered the storm of a difficult macroeconomic environment over the years.

She said this during a courtesy visit in her office by the US Ambassador to Nigeria, Mr. W. Stuart Symington.

According to Adeosun, in spite of the oil price shock and drop in production volumes, the Federal Government has succeeded in utilising the situation to reposition the Nigerian economy which would ultimately be to the advantage of the nation. She emphasised the investment in infrastructure, citing that over N1trn had so far been released.

She noted that lack of adequate investment in infrastructure has been the bane of the Nigerian economy in the past, noting that the present administration has begun to correct this anomaly.

According to her, over N1trillion has been released for various infrastructure projects across the country. She emphasised the critical role of power on job and wealth creation.

The Minister further explained that investment in public infrastructure will begin to attract private sector funding which will enable diversification and growth in priority areas like Agriculture and Housing.

The US Ambassador, in his response, stated that finance is to growth and prosperity, what oxygen is to life. He therefore stressed the centrality of the Federal Ministry of Finance to the ongoing effort to turn the Nigerian economy around and commended the efforts of the Buhari’s administration in that regard.