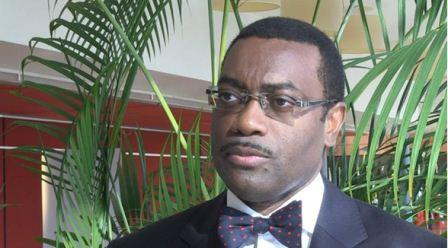 The President of the African Development Bank Group (AfDB), Akinwumi Ayodeji Adesina received his copy of the African Passport in Abidjan on Wednesday, 5 October 2016, hailing the occasion as a clear signal of Africa’s move toward integration.
“It is such a delight to be able to have an African Passport,” Adesina said, noting that it is a recognition of the critical role played by the AfDB and other African institutions that are linked to the African Union.
Noting that most Africans require visas to travel to at least 38 countries on the continent, Adesina says the move is an economic decision to break the walls that separate African peoples, making it impossible to carry out socio-economic activities. “It will reduce the cost of doing business on the continent,” he added.
Adesina, who recounted an incident in which he was detained overnight at an African airport for lack of visa, said, “Africa is home to Africans and when one is at home, one should be able to move around one’s home.” “This is an indication to me that all the walls that separate us will go down,” he said.
Until now, and contrary to the practice in other continents, non-Africans find it easier to move around the continent than Africans themselves do.
Speaking earlier after presenting the Passport on behalf of the African Union Chairperson, AfDB Secretary-General and former AU legal affairs Director, Vincent Nmhielle, said that the passport is part of the African Union’s 2063 agenda for “a continent with Seamless borders.”
He said the passport which comes in three versions – Diplomatic, (red), Administration (Blue) and Ordinary (green) is being issues to heads of state and staff of African institutions to enable them travel around the continent “on short notice.” “The travel document will eventually be issued to all Africans who apply for it,” he said.
So far, Seychelles, Mauritius and Rwanda have open visa policies.
The Africa Visa Openness Report 2016 published by the AfDB and the AU shows on average Africans need visas to travel to 55% of other African countries, can get visas on arrival in only 25% of other countries and don’t need a visa to travel to just 20% of other countries on the continent.