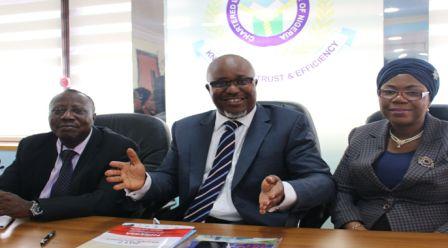 Mr. Shola Tinubu, Chairman, Planning Committee of the National Insurance Conference (c) flanked by other members at a media briefing in Lagos.

Professor Yemi Osinbajo, the Acting President is expected to declare open the National Insurance Conference being organied by the Insurance Industry Consultative Council (IICC) in Abuja from July 9-11, 2017.

Mr.  Shola Tinubu, Chairman of the Planning Committee said the idea behind the formation of the IICC was actually to give a unified and cohesive voice to the Nigerian insurance industry, with a view to making the industry accelerate its impact and contributions to the nation’s economy.

‘The National Insurance Conference is one of those programmes aimed at fostering intellectual and professional development of insurance practitioners and further creating a platform for networking and exchange of ideas between industry operators and critical stakeholders in the nation’s economy. It is most heartwarming that the 2017 Conference is being organised to further underscore the aim of the insurance industry to continually upscale the knowledge of insurance operators and other professionals in the financial services sector as well as other stakeholders about contemporary dynamics in the economic development of the country and the globe generally.’

Tinubu said the Conference would also highlight the catalytic roles which the insurance industry in achieving financial inclusion and by so doing, accelerating its contributions to Nigeria’s Gross Domestic Product.