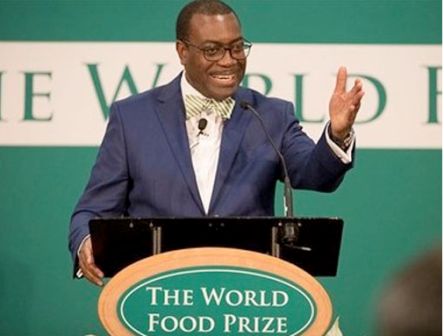 On Monday, 26th of June, 2017, Nigeria’s former Minister of Agriculture and Rural Development, now the President of African Development Bank, Dr. Akinwumi Adesina, was announced as the winner of the 2017 World Food Prize, at a ceremony at the U.S. Department of Agriculture, in Washington D.C.

The World Food Prize, which is regarded as the Nobel Prize for Food and Agriculture, was founded in 1986 by Dr. Norman E. Borlaug.

The Award recognises the achievements of individuals who have advanced human development by improving the quality, quantity or availability of food in the world.

In announcing the Award, the President of the World Food Prize Foundation, Ambassador Kenneth Quinn, stated that the selection of Dr. Adesina reflects both his breakthrough achievements when he was Minister of Agriculture in Nigeria, and his critical role in the development of the Alliance for a Green Revolution in Africa, where as Vice President, he led a major expansion of commercial bank lending to farmers.

Adesina has over the past two decades provided strong leadership in expanding food production in Africa; introducing initiatives to exponentially increase the availability of credit for smallholder farmers across the African continent; and galvanizing the political will to transform African agriculture.

As Nigeria’s Minister of Agriculture and Rural Development, Adesina was known as “the farmer’s Minister.”

Among other reforms, he introduced the E-Wallet system for fertilizer distribution. The system saved the government significant amount of money and ensured farmers have direct access to buying fertilizers.

Speaking on his selection for the Prize, Dr. Adesina said he was humbled by the award. He said his work to ensure Africa could feed itself is still an uncompleted business.

Adesina, a son of a farmer, sees his life’s mission as lifting millions of people out of poverty, especially rural farmers; and turning agriculture into business all across the continent to create wealth for African people.

According to Adesina, the Prize Award serves as an encouragement for him to continue to pursue his vision for enhancing nutrition, uplifting smallholder farmers, and inspiring the next generation of Africans as they confront the challenges of the 21st century.

As President of the African Development Bank, Dr. Akinwumi Adesina has put in place the High 5s Agenda which, among others, consist of a strategy to feed Africa.

The key to feeding Africa is to practice agriculture as a business and not as a development activity, Adesina is known to advocate. Africa has 65 percent of the world’s uncultivated arable land but, regrettably, African countries imports food worth $35 billion every year from outside the continent. He said if this is unchecked, it will swell Africa’s food import bill to $110 billion by 2025.

Under Adesina as President of the AfDB, the Bank is launching an agriculture strategy that will rapidly transform Africa’s agricultural sector, develop agro-allied industrial zones, push for food self-sufficiency and move the continent up the global agriculture value chain; and place Africa as the food basket of the world.

Adesina has called on governments and institutional investors, such as pension and insurance funds, to “see the gold” in African agriculture and invest in it to unlock its potential.

In his words, “the future of African young people lies in a more prosperous and inclusive Africa, and there is no other sector that has greater power to create growth than the agricultural sector.”

Adesina will be presented the $250,000 World Food Prize and Laureate sculpture at a ceremony that will hold later in the year on October 19 in Iowa State, USA.

Since its establishment more than 30 years ago, the World Food Prize has honoured45 individuals from 18 different countries.

Adesina is the 46th person, and the sixth African, to win the World Food Prize.