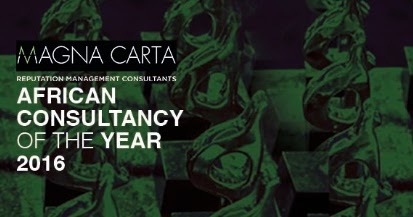 The awards were hosted by the Holmes Report, with their editors having reviewed the performance of 400 agencies based on their Report Card research process.

The judging process was extensive, involving hundreds of submissions from the best public relations and strategic communications firms from across Europe, the Middle East and Africa.

“We were delighted to be amongst top agencies as finalists for Africa PR Agency of the Year and we are thrilled to be recognised by the industry and our peers,” says CEO, Vincent Magwenya.

With an ever-growing pan-African network of 19 countries, including Nigeria, Ghana, Kenya, Mauritius, Angola, Mozambique and, most recently, Zimbabwe, Magna Carta’s philosophy of continuous evolution remains a key driver in integrating global best practice, while keeping a finger on the pulse of local services and offerings.