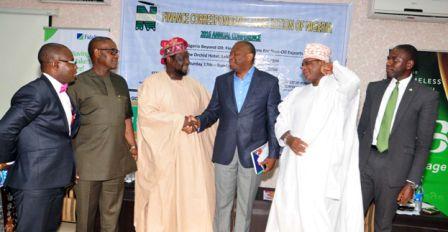 The bank chief who spoke at the 2016 Annual Conference organised by Finance Correspondents Association of Nigeria (FICAN) in Lekki, Lagos, at the weekend, said although the lenders would want the economy to grow by lending to farmers and other productive sectors of the economy, they also have to keep an eye on the stability of their institutions.

Speaking on the theme: ‘Nigeria Beyond Oil: Financing Options for Non-Oil Exports’, he said:

“A whole lot of people do not realise that banks’ business is to buy and sell money. So, I come to the market to purchase-my raw material is cash and my finished goods are also cash. Every other thing banks do are added services. Banks get a lot of bashing for not lending long-term. Then I ask you, if as a banker, I know that secret place where I can find long-term funds, we will be the number one bank in Nigeria today, because I can lend long-term.”

Okonkwo reiterated that most depositors who have huge amounts to save invest on short-term basis and collect huge interest on such deposits.

“I want to borrow N100 million; then bring me one depositor who will place N100 million with me at 10 per cent and I will lend at 15 per cent. Remember that in calculating those 10 per cent of N100 million, what you have actually given me is N75 million because N25 million will be placed with the CBN as Cash Reserve Ratio (CRR). And for me to access N5 million out of the N25 million CRR cash, I have to lend the money for use in industrial production. Then what are your risk assessment criteria if the industrial sector you want to lend to is fighting for breath.”

Besides the CRR, he said such lender has to pay five per cent of the N100 million initial deposit to the Nigeria Deposit Insurance Corporation (NDIC) premium. “People actually believe that banks are not lending long-term because they do not want to. We do profitable business,” he said.

He explained that pension funds, equity and insurance funds where long-term funds should come from are not forth-coming with such cash.

The Fidelity Bank boss also listed lack of right framework as being responsible for local banks not lending long-term to Small and Medium Scale Enterprises (SMEs).

He lamented the problem of lack of infrastructure, such as power, adding that his bank with about 248 branches generate private electricity to power its operations, that the level of such power generation can serve Lagos State as a whole.

He regretted that a lot of banks collapsed in the past because of assets mismatch.

“When there is a run on the system, the owners of the short-term funds will come for their money and you have to pay them. And if you pay them, the people you gave long-term loans cannot pay up. Then you begin to have distress in the system,” Okonkwo stated.

He disclosed that the Nigerian Export Import Bank (NEXIM Bank) and his bank are taking measures to enhance non-oil export and create wealth for Nigerians. Both lenders, he said, want exporters to explore opportunities presented by the N500 billion Non-oil Export Stimulation Facility as well as the expansion of the export credit Re-discounting and Refinancing Facilities (RRF) to develop the economy, stimulate their operations, and create jobs for the people. He said his lender is always at the forefront of financial services solutions and lending, stressing that supporting SMEs goes beyond funding.

Okonkwo praised the Anchor Borrowers’ Scheme unveiled by the Central Bank of Nigeria (CBN), insisting that the project has the capacity to boost the country’s non-oil export earnings.

“The CBN has ensured that thousands of rice farmers form the anchor borrowers. The CBN lends money to the farmers, but you know it is not like in the past when the farmers saw such cash as government money and find it difficult to repay. What the CBN does now is give them the money in the form of inputs and improved seedlings. And the farmers have formed themselves into co-operatives to make loan repayment easy. And when the produce are harvested, the farmers get immediate buyers for their produce. I believe that over time, Nigerians will feel the impact of the scheme,” he said.

Also speaking at the event, Group Head, Agric Finance, Heritage Bank Limited, Olugbenga Awe said inasmuch as banks would want to lend to non-oil sectors of the economy, the lenders always look out for customers’ history of previous transactions to ensure that the loans would be repaid.

The bank, he added, can also consider the export volume, frequency of export, payment methods and transaction cycle. He said that banks are also confronted with the problems of inadequate export finance resources, inadequate infrastructure to control products quality and lack of dependable source of local product prices and supplier information among others.