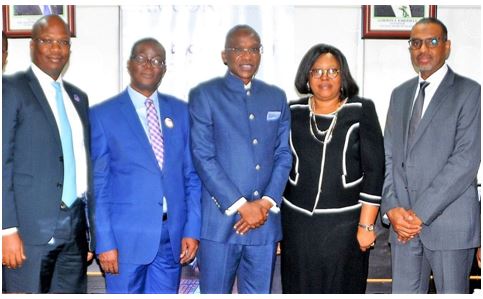 Worried by the resurgent of huge toxic loans in the banking sector, Mr. Ahmed Kuru, Managing Director/Chief Executive Officer, Asset Management Corporation of Nigeria (AMCON) yesterday in Lagos called on the Nigerian authorities to revisit the Failed Bank Act so that operatives in the banking sector would be made to account for their actions, just as he urged banks to immediately strengthen their risk management framework to stem the negative growth.

Kuru who spoke yesterday when he played host to officials of Risk Management Association of Nigeria (RIMAN) at AMCON Lagos office, said the reintroduction of the Failed Bank Act into the country’s financial system will not only curtail the current trend of financial rascality on the part of some bankers, he said it would bring discipline to the banking industry in general. RIMAN led by its President, Mr. Magnus Nnoka, CRM, the Chief Risk Officer, Coronation Merchant Bank; were in AMCON on a business visit.

Having been privileged to have been on both sides of the divide – as a banker and now on the regulatory side, Kuru explained that given the huge resources that are available to financial institutions and the pivotal role they play to the development of the economy makes it mandatory for financial institutions to take the issues of risk management seriously to prevent what happened during the global financial crisis.

He suggested that in line with the fight against corruption, there was also need to fight against impaired and arranged credits so that operators are held responsible for booking credits contrary to their credit policy, that go bad under their supervision.

Reiterating that one of the reason for the failure of the banking system during the global financial crisis of 2008/2009, which eventually led to the creation of AMCON was because of the prevalence of weak risk management framework by financial institutions, Kuru said that the trend became a baggage, which contained all sorts of bad omen for the economy including poor corporate governance structure, lack of robust risk management strategy and lack of adherence to laid down principles that govern credit approvals by financial institutions.

He added: “I have been on both sides, therefore, I can authoritatively comment on issues relating to risk management. Immediately after the intervention of the Central Bank of Nigeria (CBN) in 2009, they insisted that risk management must be given prominence right from the Board level to the account officer. What we have noticed now is the lack of consequent framework to manage the risk structure. We have noticed prevalence of key men risk. Credits are booked with impunity without any intentions of being paid. The grievous impunity is taking place along the credit process. There is the urgent need to revisit the failed bank act so that operatives become responsible for their actions. We believe it will bring discipline to the banking industry.”

Kuru who said the damage financial institutions do to the economy when they book fictitious loans was worse than corruption added: “AMCON is currently sitting on huge stock of non-performing loan, with banks looking for liquidity to book more loans. As practitioners, you need to join the campaign to bring sanity in own credit process. You can clearly see that the system is skewed towards accommodating large credits, which pose serious survival challenges to the financial institutions on failure. Whilst the small credit SMEs always require regulatory intervention to be accommodated. Given what I have seen in AMCON, we must bring both the obligors and the operators to account for the bad credits.”