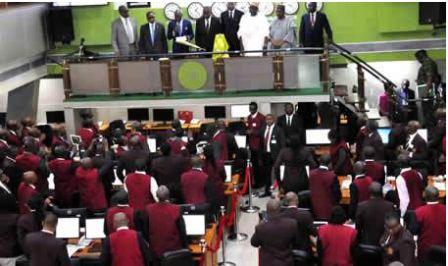 The negative trend in the equities market was extended into the third consecutive trading day as the All Share Index (ASI) fell 2.7% to close at 36,102.38 points whilst YTD gain further moderated to 34.3%. Accordingly, market capitalisation declined by N346.1bn to settle at N12.4tn.

The poor performance was majorly attributable to negative sentiment towards DANGCEM (-4.9%) and GUARANTY (-4.7%) in addition to profit taking in NIGERIAN BREWERIES (-2.6%) and ZENITH (-3.3%). However, activity level on the exchange waned as volume and value traded dipped 42.6% and 6.4% to 224.8m units and N5.1bn respectively.

Industrial Goods Index Tops Sector Losers
Performance across sectors was bearish as all indices trended southwards. The Industrial Goods index led losers, down 3.1% on account of sustained losses in DANGCEM (-4.9%) and WAPCO (-1.7%).

Investor Sentiment Remains Weak
In line with benchmark performance, market breadth remained weak, as the ratio of advancers to decliners settled at 0.3x (same as yesterday’s close of 0.3x) after 10 stocks gained against 30 losers.

As we noted yesterday, market performance remains driven by profit taking after the sustained rally in prior weeks.

Nonetheless, we believe this negative trend will be reversed on account of bargain hunting. Hence we anticipate a rebound in the equities market in subsequent sessions this week.