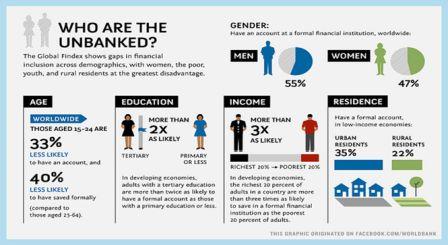 More than two billion people worldwide are without bank accounts. Most are poor and only a third of adults in sub-Saharan Africa have access to any kind of basic financial services. IMF Deputy Managing Director, Mitsuhiro Furusawa, says the region is running the development race weighed down by exclusion.

“Access to financial services allows families to smooth out consumption and invest in their futures through education and health. And access to credit enables businesses to expand, creating jobs and reducing inequality,” Furusawa added.

Furusawa is in Dakar, Senegal to attend a conference designed to promote financial inclusion in West Africa. With less demand for African products, the slower global economy has put added pressure on many African economies, particularly the natural resource exporters, to find ways to reinvigorate growth. Furusawa said financial inclusion is one key for promoting strong and stable economic growth.

There are many reasons for the lack of access to traditional financial services, but Roger Nord, Deputy Director of the IMF’s African Department, says technological innovation within the financial sector, commonly known as Fintech, is perhaps the most promising way to advance financial inclusion.

“Access to formal financial services is often difficult in low-income countries: bank branches are concentrated in urban areas, and costs and fees can be high. Financial technology can tackle both problems at once: suddenly financial services are available to anyone with a mobile phone at a fraction of the cost,” Nord said.

And the rapid spread of technology is proving its worth. Sub-Saharan Africa leads in the adoption of mobile banking around the world.

In Kenya, for example, the mobile banking system known as M-Pesa that started as a way for mobile phone users to transfer unused air minutes to each other, quickly turned into a cash payment platform. Rather than spending several days traveling by bus to deliver cash to family members in rural villages, one could send money via text message, at a minimal cost.

Local banks have since teamed up with M-Pesa, and started offering users a savings option for unused balances in their M-Pesa accounts—paying interest, regardless of how small the account balance. Meanwhile, user data enables the issuance of micro-loans to those deemed creditworthy.

As a result, more Kenyans are saving and borrowing, and the proportion of the population excluded from financial services has fallen below 17 percent. Kenya is now third in sub-Saharan Africa for financial access, behind South Africa and Mauritius.

Other East African countries such as Tanzania, Uganda, and Rwanda are following Kenya’s example, using financial technology to leapfrog traditional banking systems and provide financial services to all levels of society.

The Promise of Fintech

The power of financial technology to lower transaction costs and expand access to financial services is not limited to low-income countries in Africa.

A recent conference co-organised by the IMF and Singapore Management University illustrated the global potential of Fintech.

In China, the financial services arm of online retailer Alibaba has grown so rapidly that it now surpasses the largest Chinese commercial banks in transaction volumes. India’s biometric identification system, Aardhar, has started to open up low-cost financial services to previously underserved populations.

And, in advanced economies, there are a multitude of technology start-ups aiming to revolutionise global payment and settlement systems through the use of digital currencies and block-chain technology.

Meanwhile, regulators are carefully considering the impact of new technology on the stability of the financial system, including on money laundering and the financing of terrorism. The financial technology revolution is likely still some way off, but for low-income countries the benefits are tangible and, as in the case of Kenya’s M-Pesa, already evident. Financial institutions are quickly adapting to Fintech innovations that will ultimately bring more unbanked into the banking fold, which Furusawa says is essential for the economic development of the region.

The conference in Dakar is co-hosted by The Bank of West African States (BCEAO) and the IMF, and will examine the prospects and policy options for promoting financial inclusion in West Africa.