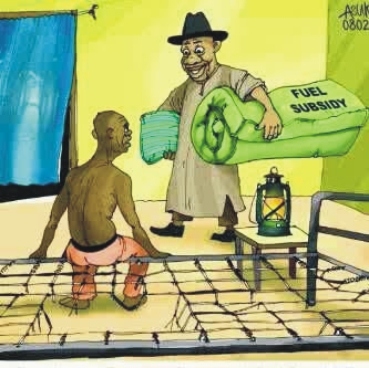 For the price of cheap gasoline, Nigeria paid billions of dollars into a corrupt government system of fuel subsidies that saw huge contracts awarded to shady companies without any oversight, according to a lawmakers’ report.
The report, debated Tuesday in Nigeria’s House of Representatives, is breathtaking in its scope, even for a country where many grudgingly accept graft as a way of life in the OPEC nation’s oil industry, government and private sector. But some fear it may not change much, especially as it implicates some of the same elite class that dominate politics and business in Nigeria.

“We are fighting against entrenched interests whose infectious greed has (hurt) our people,” House Speaker Aminu Waziri Tambuwal said. “Therefore, be mindful they will fight back and they normally do fight dirty.”
The investigation by lawmakers began as a response to the national strikes and protests that paralyzed Africa’s most populous nation in January following the removal of popular subsidies on gasoline that keep prices low. On the orders of President Goodluck Jonathan’s administration, prices at the pump jumped Jan. 1 from 45 cents per liter ($1.70 per gallon) to at least 94 cents per liter ($3.50 per gallon).
Jonathan later announced a new, partially subsidized price of 60 cents a liter ($2.27 a gallon) to stop the six-day national strike. The president also deployed soldiers into Lagos and other cities in the country who blocked demonstrators and at times fired live ammunition and tear gas at them.
The subsidies, in theory, keep prices artificially low for buyers while paying companies for bringing in refined gasoline at a loss against the world market price. Nigeria, despite producing about 2.4 million barrels of oil a day, has decrepit refineries unable to meet the nation’s demand for gasoline due to years of mismanagement and sabotage.
However, gasoline importation licenses became a means of patronage, as the number of companies involved jumped from six in 2006 to 140 in 2011, according to the report. In 2009, when there were 36 companies licensed to import, government officials once issued about $800 million in 128 transactions in a 24-hour period without proper documentation, the report reads.
Companies also won approval without any real oversight. In one case, two businessmen who made a pitch to handle waste management at the state-run Nigerian National Petroleum Corp. instead applied to become importers and got a $12.4 million contract in 2011 for fuel it never supplied, according to the report.
The state-run firm, which foreign oil companies must partner with to pump crude out of the country, also spent $1.94 billion on subsidizing kerosene even after late President Umaru Yar’Adua’s administration eliminated the price controls in 2009, the report reads.
“The operations of the (state-run oil company) were opaque and not transparent,” the report reads. “The implication on this is that it created room for abuses, inefficiencies and manifest lack of accountability.”
In total, the report demands $6.7 billion be refunded by importers, the state-run oil company and other agencies tainted by alleged corrupt subsidy payments.
“Government officials made nonsense of … guidelines due mainly to sleaze and, in some other cases, incompetence,” the report reads. “It is therefore apparent that the insistence by top government officials that the subsidy figures was for products consumed was a clear attempt to mislead the Nigerian people.”
While the nation’s Finance Ministry has fired independent auditors faulted in the report, private importers have taken out full-page ads denouncing the report. The national oil company also has denied the allegations against it.
On Tuesday, lawmakers shouted over themselves while discussing the report. Some stood up and left. Private network Channels Television broadcast the debate, while the state-run Nigerian Television Authority aired a live news conference on the anniversary of President Jonathan’s first year in office.
Yet it’s unclear what action will be taken as the report notes it appears the subsidy program rewarded patrons and loyalists to the government. A bill to privatize and breakup the state-run oil company, as well as overhaul the country’s regulations on production, has languished for years before lawmakers. Meanwhile, police and anti-corruption officials have seen several major prosecutions fall apart in recent months.
“Nigeria is designed to shield big, daring and well-placed criminals from any form of discomfort, much less serious criminal prosecution. … Far from being blind, Nigerian law (like those who enforce) always has an eye open — and can tell the riff raff from the ‘chieftain” and ‘critical stakeholder,'” columnist Okey Ndibe wrote in Tuesday’s edition of The Daily Sun newspaper. “The former can be thrown in jail without the pretense of a trial; the former is, quite simply, above the law.
“But the system will remain so rigged only if enlightened Nigerians elect to do nothing.”